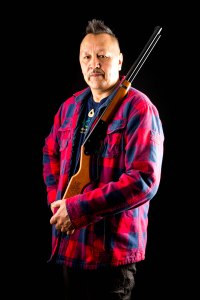 Co-host Chef Dan Hayes in Moosemeat and Marmalade on APTN

As the unit publicist for APTN’s third season of the Indigenous cooking series, Moosemeat & Marmalade, this production stood out from my other indie film projects for a few reasons. 1) It would be my first time doing publicity for a TV series, 2) It would also be my first time promoting Indigenous food culture and 3) As a recurring client of The Social Agency (a boutique PR agency I do contract work for), they’d already established press coverage from numerous outlets across Canada for the past two seasons that saw the show increase in popularity.

So as the new publicist coming into the project, I had both the added benefit & challenge of pitching Canadian media coast to coast as well as trying to establish new story angles for a series that had already covered a lot of ground over two seasons. Additionally, I didn’t want to just obtain press coverage from outlets already familiar with the TV series, the goal was to expand coverage to reach completely new audiences.

There was also the media relations strategy between the outlets and the two co-hosts; Cree bush cook/Indigenous rights activist Art Napoleon and UK born Chef Dan Hayes, owner of The London Chef Cooking School, to consider.

Focusing on story angles such as the first-ever gleaned Vegetarian Chili recipe (meaning it used leftover crops after the harvest) and Indigenous food culture and sovereignty, I pitched several mainstream major city newspapers, blogs and radio stations across Canada.

As the TV series also filmed in several locations on the Gulf Islands, Vancouver Island, Northwest Territories and overseas in the UK, I pitched the story angles to publications, radio stations and blogs located in these specific regions. Using the Indigenous food culture angle and Art’s passion for Indigenous food sovereignty and security, I was also able to secure interviews, coverage and recipes in Indigenous radio shows, newspapers and websites.